Uniper has developed a neural network-based tool that directly operates asset processes such as the combustion in waste-to-energy or biomass-to-energy. By customizing the AI tool using the historical data of the respective process, Uniper increased e.g. the customer’s throughput and steam production while reducing its emissions.

As part of our focus on digital engineering, we’ve been trialling the benefits of using AI live at our client’s EFW plant in Germany. The ongoing pilot project, which has run for 26 months and well over 18,000 run hours to date, is the first of its kind anywhere in the world and aims to overcome the challenges of using AI in the sector while delivering multiple benefits.

The site team initially approached us for help to improve firing control in their waste incineration boiler. We quickly identified that traditional ways to automize wouldn’t help in this case. Data analysis and prediction models would be able to explain some developments; however, the plant need a tool that directly supports their day-to-day operations of the combustion process. So, we developed an AI tool that can function as the autopilot of the combustion process. 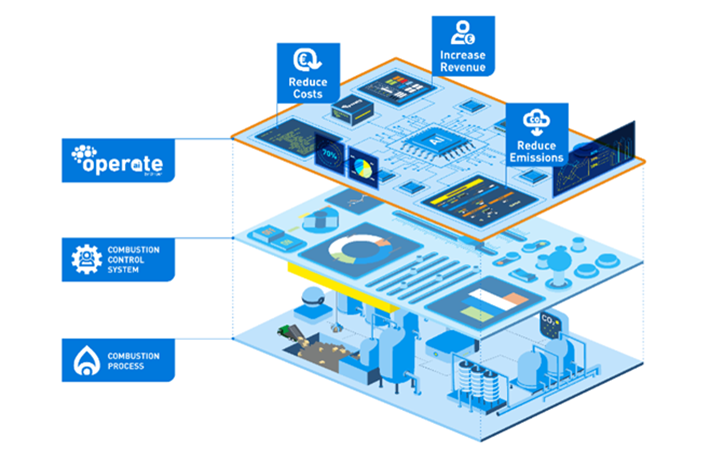 By using artificial neural networks (ANNs), capable of modelling and processing non-linear relationships between inputs and outputs in parallel, our AI tool effectively learns from the plant’s best human operator to control firing-rate in the boiler.

Capable of handling huge complexities, our AI tool learnt the plant’s whole process – from waste input to energy output. It uses 24 measurements and leverages all relevant sensor data to analyze an 80-minute timeframe. The AI tool is constantly optimizing the firing-rate control in the boiler, 24/7, including during dead times. It brings together the on-site team’s expertise and data combined with our expert know-how in operations and engineering to continuously self- optimize their processes and predict complex events before they happen.

The input signals used by the neural network include all the measurements recorded by the plant’s sensors, such as steam flow, with the outputs controlling firing-rate in the boiler. Our AI uses all that information to understand the process continuously over time and make optimized decisions about the operation of 12 different control functions such as dampers and the load factor. Every second it’s in operation, it’s making a difference. The results of the trial exceeded both our and the plant’s expectations.

Aside from efficiency, our client was also able to reduce the plant’s carbon footprint: O2 levels were cut by 30%, their use of consumables such as oil was reduced, while both steam and O2 levels operating steadier.

Crucially, using ANNs meant that AI could be implemented directly into the plant’s Distributed Control System (DCS), whilst leaving all the plant safety systems undisturbed and removing any data security risks associated with cloud-based AI.

By increasing both waste throughput and steam output, our AI solution increased efficiency and return on investment at both ends of the EFW business model. Similar results are to been seen for Biomass-to-Energy plants.